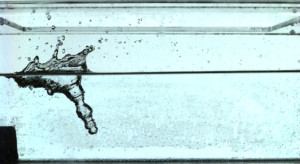 The BBC just covered one of our conference talks entitled “Urinal Dynamics”.  This research highlights the physics of urinal usage.  Through high-speed videos we show that significant splash back can occur when using a urinal, however, there are mitigation techniques.  First, aim for a vertical surface rather than a horizontal one and keep away from the water bowl.  Second, get close enough that the stream remains a stream rather than breaking up into droplets.  Third, aim at an angle to the urinal either by aiming sideways or downward.

This stream of water is a simulated urine stream entering a body of water similar to a toilet.  The amount of splash is considerable and should make one reconsider standing up to urinate.  The repeated impact of the droplets opens up a large and interesting cavity with multiple ridges.  Each droplet forms a small cavity wherein the next droplet can pass through and form a cavity an additional cavity creating a chain of small cavity structures.  Splash is formed both from the initial impact as well as the collapse of this large cavity.  The process repeats itself over and over creating a real mess.

We illustrate the importance of good technique when using a urinal and offer some advice. Through high-speed video footage of a simulated male urine stream we show that reduced splash can be achieved by aiming at a vertical surface, moving closer to the urinal and by decreasing the impact angle.

Two videos highlight the effects of distance on splash back. When the stream is closer to the wall less fluid is ejected back toward the source. When further away the stream becomes individual droplets that impact the wall and create more splash back.

We were featured on Saturday Night Live during the weekend update with Seth Myers!  Thanks SNL!