Eggs Spinning in Milk: Publication in Physics of Fluids 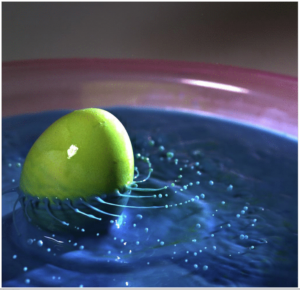 We are proud to announce that our work on spinning spheres in a shallow bath has now been published and featured on the cover of Physics of Fluids!  When a hard-boiled egg spins through a pool of milk on the kitchen counter, the milk rises up the sides of the egg and droplets are ejected. This phenomenon occurs when any partially submerged object whose radius increases upward from the fluid surface (e.g., spheres, inverted cones, and rings) spins in a liquid bath. The fluid ejects from the surface near the maximum radius in one of three ejection modes: jets, sheets, or sheet breakup. Additionally, a surprisingly large flow rate is induced by the spinning object.

We focused mainly on spheres in our study to characterize the modes of ejection and measure the sheet breakup distance through the use of high-speed cameras. Upon initial inspection, one may postulate that the fluid ejects due to centrifugal forces overcoming the forces of surface tension. If this were the case, then at higher spin rates, ejection would occur at lower angles of ?. However, our experimentation has shown that at these higher spin rates, the fluid remains attached near the equator. Instead, the flow phenomena is an inertia dominated, boundary layer/thin film that is driven by the centrifugal force induced by the rotation of the sphere similar to the Von Karmán viscous pump.

When properly understood, the spinning sphere could be incorporated into several practical applications. For example, it could be used as a scavenging pump because it is capable of high flow rates with high viscosities, it can rest on the bottom of the container that is being emptied and continue to pump fluid, and it only has a single moving part making it easy to clean because the pumping mechanism is exposed.

The full article can be found here.

To see an older post that includes a Science Friday video go here.

Talk of the Nation

The image for the cover of the March issue of Physics of Fluids comes from a video of spinning egg in milk. The egg has been dyed green and the milk has been dyed blue all in a pink plate.  We have attached the video here for your viewing pleasure.